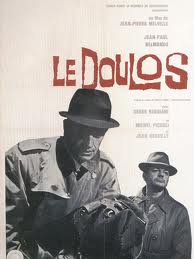 Le doulos was one of numerous primarily French films made with a small amount of Italian input.  In this case, the producer was Carlo Ponti, who’d already worked with director Jean-Pierre Melville on the war film Léon Morin, Prêtre (61), and Melville would also have another part in the Claude Chabrol film Landru the following year.  The late fifties and sixties, in particular, was a period marked by a suffusion of international co-productions, with a mish-mash of French, Italian, Spanish and German companies all investing in each others films.  A lot of the time, this had two purposes: as well as boosting the budget by having foreign money involved, most countries had some kind of complex tax rebate scheme in operation, and a film produced in more than one country would be able to access international funds, rebates and distribution channels that would otherwise be unavailable. Almost all of Melville’s films, for instance, were Franco-Italian productions despite being – to all intents and purposes – almost entirely French.  Similarly, most of Francesco Rosi’s films were Italo-French productions, even though hardly any of them had any active French involvement.

Based on a novel by Pierre Lesou, whose work would also be adapted in other Franco-Italian films like Yves Boisset’s Blood on my Hands (70) and Bruno Gantiollon’s Without Warning (73), the plot follows Maurice Faugel (Serge Reggiani), just out of prison and all out of money.  Partly out of revenge for a betrayed and murdered colleague, partly motivated by greed, he murders a fence and steals a stash of jewels from him, burying them in a safe place until the heat has died down.  In the meantime, he’s also planning an apparently simple robbery: breaking into a plush mansion, opening the safe and making off with all its contents.  Along for the ride is his safe-cracker partner, Remy (Philippe Nahon), working with equipment supplied by an old friend of theirs called Silien (Jean Paul Belmondo).  Silien, though, is an informant, and tips the cops off about their plan, as a result of which both Remy and Silien’s police contact are killed.

Maurice, understandably, is mad about all this, and determines to have his revenge, especially when he finds out that his girlfriend has been murdered while the misfiring burglary was taking place.  Silien, meanwhile, is having pressure put on him by the wily Commissioner Clain (Jean Desailly) to help apprehend Remy’s unknown accomplice and, in order to get the cops off his back, comes up with a scheme to frame a rival gangster, Nuttheccio (Michel Piccoli) for both of Maurice’s crimes.

This is a macho, cool film, drenched in the smoke of Gaulois cigarettes, shot in the light of headlights piercing through the foggy night and populated characters speeding rapidly down the road to nowhere and doing absolutely nothing to make their situations any better.  Almost nobody is as they initially seem, just about everyone is running some kind of duplicitous scam – even if they’re doing it out of admirable motivations – and it’s hard to think of any of them as being particularly heroic.  It’s about as hardboiled a crime film can be, the black and white cinematography of the underrated Nicolas Hayer is exquisite and Melville, who is now acknowledged as one of the authentic masters of this kind of thing, directs it all with the expected panache.

It’s interesting comparing this, as a French noir, to the Italian equivalents of, say, Franco Prosperi and Fernando Di Leo.  All three directors were highly influenced by the American noirs, but Melville also seems more intent on recapturing some of their look and style as well; his films have an almost expressionist feel, which isn’t surprising considering that a not insignificant number of the noirs had been directed by ex-pat Austrians and Germans like Fritz Lang and Otto Preminger.  Prosperi and Di Leo, on the other hand, pack their films with more action and pace, whereas Melville seems more than happy to let his films play out in a slow-moving, moody fashion, the Italian directors were more intent on keeping the audience involved by throwing in a cool stunt or gunfight.  Plot wise, though, Le doulos is almost indistinguishable from Di Leo’s Milano Calibro .9: both films feature a recently released ex-con who pulls some kind of scam on his underworld associates, is involved with a girlfriend who isn’t quite what she seems and has an odd relationship with another, more confident and settled criminal.