Angels, they’re a bit of a tough call. Let’s face it, they have connotations of, well, how to put it… nutters. You know, the kinds of people who you start up a reasonable conversation with at a party but then they reveal that they actually believe in angels and it all becomes increasingly weird. Either that or they have dyed red hair and wheel around shopping trolleys. So films about angels have a faint whiff of naffness about them even before they’ve started. 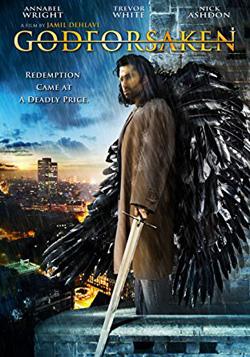 Which makes Godforsaken, a low budget 2010 film directed by Jamil Dehlavi, rather an impressive affair; not only does it manage to avoid being overly silly, it’s also rather good. The story have an agreeably complex structure, with assorted flashbacks revealing the story, but the majority of it is recounted by Lucille (Annabel Wright) to a priest (Dominic Mafham). She tells him about her marriage to an annoying multi-millionaire (Trevor White), whose first wife Martine (who we never see the face of) went mad after the kidnapping and murder of their daughter. However, a rogue angel (Nick Ashdon) enters the picture, sent to earth as punishment for failing to watch over the dead child, and he seems to have some kind of plan to make up for his previous failure… but what exactly is he up to, and is he even more crazy than Martine?

Although it never quite manages to overcome the limitations of its budget, Godforsaken is a step up from other films of similar means because it’s skilfully shot, features an excellent soundtrack by Deborah Mollison (who also scored East is East) and acting of a much higher calibre than usual. Annabel Wright – who recently turned up in Lake Placid vs. Anaconda (2015) – and Dominic Mafham are particularly good. The script, which mixes up Wings of Desire, Eyes Without a Face and Vertigo, doesn’t make a great deal of sense, but it has twice the imagination and ambition of most British movies (it was based on a story by French writer Yolaine Destremau). Jamil Dehlavi is something of a ‘hidden’ filmmaker: he made the biggish budget historical epic Jinnah, about the founding of Pakistan, in 1998, and since then has directed a handful of little seen but acclaimed films (Infinite Justice (2006), Seven Lucky Gods (2014)) that are worthy of further attention.