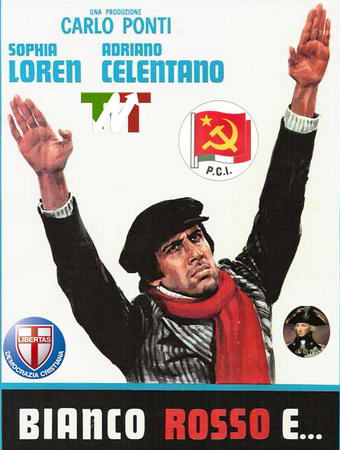 There was something of a vogue for nun movies in the early seventies, both in a historical and contemporary setting.  Many of them leant towards the exploitative, a lot of them are utterly ridiculous and almost all of them involved their protagonists losing their clothing at regular intervals.  As you’d expect from its estimable director, Alberto Lattuada, The Sin is something a little bit more prestigious: although the main character is the stock figure of a nun having problems with her closeted situation, the film attempts to be a serious look at contemporary issues and the relationships between people of different beliefs (or faiths).

Sister Germana (Sophia Loren), a young nun who took up holy orders after the death of her fiancee in an industrial accident, is expelled from her Libyan homeland by the new revolutionary government and posted to work in a hospital in Italy.  She finds it to be a rather relaxed place, presided over by an extremely chilled director (Fernando Rey) and home to an eccentric roll call of patients.  Before long, though, she’s starting to bring things to order: chucking out a weird and totally unofficial collection of mummies (!), cleaning up the operating theatre, generally stamping out any kind of fun.  The bane of her life, though, is Annibale Pezzi (Adriano Celentano), a happy-go-lucky communist activist with a dodgy leg, who’s been a patient so long he’s virtually a member of staff.

Inevitably enough, despite their ideological differences and very different approaches to life, they start developing a grudging respect for each other. As their relationship becomes more complicated, Annibale is left with no choice but to leave, using the medical knowledge he picked up at the hospital to set himself up as a kind of travelling doctor (despite his lack of any kind of qualifications).  Germana, meanwhile, is having all kinds of second thoughts about her chosen vocation.

This is a peculiar old mess of a movie.  Part nunsploitation (although lacking nudity and violence, it still plays up to the idea of the nun as an erotic symbol), part star vehicle for Sophia Loren – who makes for one of the most unlikely nuns imaginable – and part political film, it’s almost like a weird meeting between characters from, say, Elio Petri’s Working Class Go To Heaven, The Nun’s Story, Brittania Hospital and, briefly, Roma violenta (complete with Carlo Gaddi and Adolfo Lastretti as a pair of sallow bank robbers).  The result is different, for sure, but not entirely successful.

Part of the problem is that the filmmakers never seem to be sure what kind of story they’re actually telling.  There are comic elements, but these are peripheral, it has a message, to an extent, but the whole thing is based around a plot that seems to have been manufactured to create the maximum in melodramatic syrupiness.  There were an estimable group of writers behind the script, but it just doesn’t gel: you can almost see the separate influences of Tonino Guerra (political, esistential), Ruggero Maccari (social comedy) and Jaja Fiastri, but they seem to have been working against each other rather than in tandem.

Furthermore, Lattuada directs with a somewhat heavy touch.  There are good moments and it’s nicely assembled, with good cinematography and music (which recalls some of the more introspective interludes from a Morricone western score), but it feels way too heavy and ponderous for what is essentially a rather silly subject.  I find it hard to get a handle on Lattuada, he was obviously a talented filmmaker, but his films en masse don’t seem to have much of an identity, which is perhaps why he’s fallen somewhat out of fashion over the years.